Fyodor Mikhailovich Dostoevsky (Фёдор Миха́йлович Достое́вский  ( 11 November 1821 – 9 February 1881) was one of the great Russian writers, His first encounter with Saint Petersburg occurred in May of 1837, at the very beginning of “white nights”, the city’s most poetic time of year. Petersburg stood before the future writer as a beautiful, romantic city:

“There is something inexpressibly touching in nature around Petersburg, when at the approach of spring, she puts forth all her might, all the powers bestowed on her by Heaven, when she breaks into leaf, decks herself out and spangles herself with flowers”. 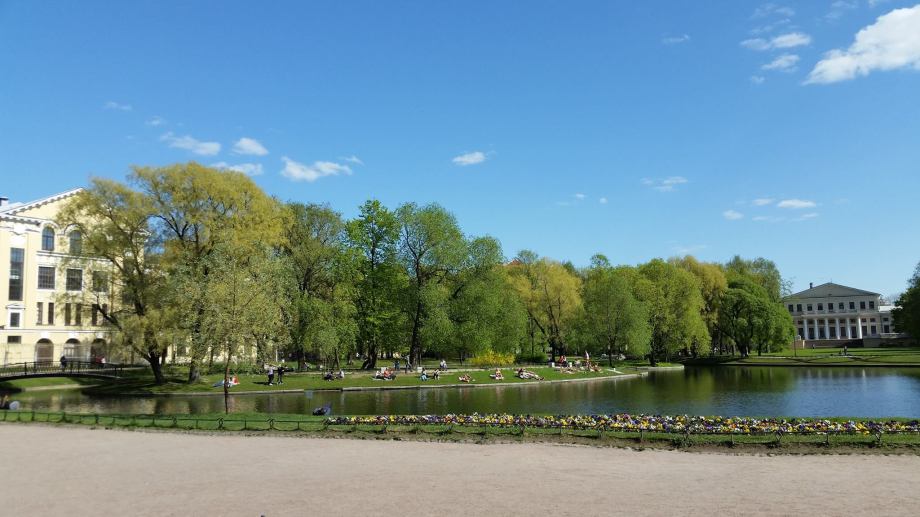 His first novel, Poor Folk, was published in 1846 when he was just 25. In 1849, he was arrested, sentenced to exile and hard labour in Siberia until his release in 1854. In the beginning of October 1878 Fyodor Mikhailovich Dostoevsky and his family moved to apartment at 5 of Kuznechny Lane and lived there till his death on January 28, 1881 . In the Soviet years the building on Kuznechny Lane was reconstructed and later housed ordinary communal apartments. Among Dostoevsky’s numerous Petersburg addresses, this building on the corner of Kuznechny Lane and Dostoevsky Street (formerly Yamskaya) holds particular significance. The writer moved there with his family in the beginning of October 1878 and was to  reside there until the day of his death, January 28, 1881. It was in this house that many many of Dostoevsky’s contemporaries were to visit him, and his last novel, The Brothers Karamazov, was written. This simple, completely ordinary Petersburg apartment building, devoid of distinctive architectural features, has today become one of the most popular attractions in the city precisely because it was there that Dostoevsky lived and died.

“From the study windows one can see the cupolas of Vladimir Church, where Dostoevsky attended services in the last years of his life…” The balcony at the house at 5/2 Kuznechny Lane. Dostoevsky had rented an apartment in this building twice, once for a very short time in 1846, and then from October 1878 until his death, on January 28, 1881. The beginning and end of his writing career turned out to be joined together in one spot.

The memorial plaque was placed on the house of Kuznechny Lane in 1956. In 1968 the house was put to capital repairs, after which the apartment of Dostoevsky was restored by the archive plans and his contemporaries reminiscences.
In November 1971, on Dostoevsky’s birthday, the inauguration of the Literature and Memorial Museum of the writer took place.

The period from 1864-1881 saw the creation of Dostoevsky’s greatest works:

In 1880, shortly before he died, Dostoevsky gave his famous“Pushkin Speech”at the unveiling of the Pushkin monument in Moscow. Dostoevsky’s famous text provoked his audience to something resembling mass hysteria, momentarily reconciling the feuding intellectual factions of Slavophiles and Westernizers. 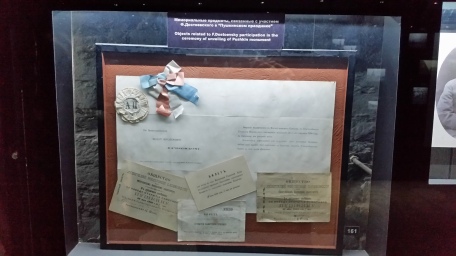 Documents related to Dostoevsky’s attendance of the unveiling of the Pushkin monument in Moscow, June 8th 1880, where he gave his famous ‘Pushkin speech’ 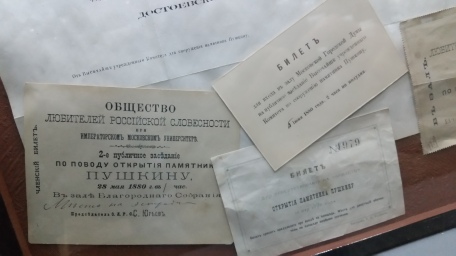 the unveiling of the Pushkin monument in Moscow

On that unique literary moment, José Martí Pérez (January 28, 1853 – May 19, 1895) a Cuban national hero and an important figure in Latin American literature, wrote a historical review entitled: ‘Un monumento al hombre que abrió el camino hacia la libertad rusa‘, where the Cuban poet pays homage to Pushkin as: “Un hombre de todos los tiempos y de todos los países, el universo en un solo pecho… no es conocido universalmente porque escribió en ruso, pero una vez conocido, no puede ser olvidado” (A man of all times and all countries, the universe in one breast … not known universally because he wrote in Russian, but once known, it can not be forgotten )”. Thanks to Alejo Carpentier, who gave me this text, in his last visit to Havana, as an adolescent myself, I discovered the names of the Classics of Russian literature, among them, Fyodor Mihailovich Dostoevsky.

Dostoevsky died in 1881. In the Tikhvin Cemetery at the Alexander Nevsky Convent, his tombstone is inscribed with the biblical lines that begin Dostoevsky’s Preface to The Brothers Karamazov 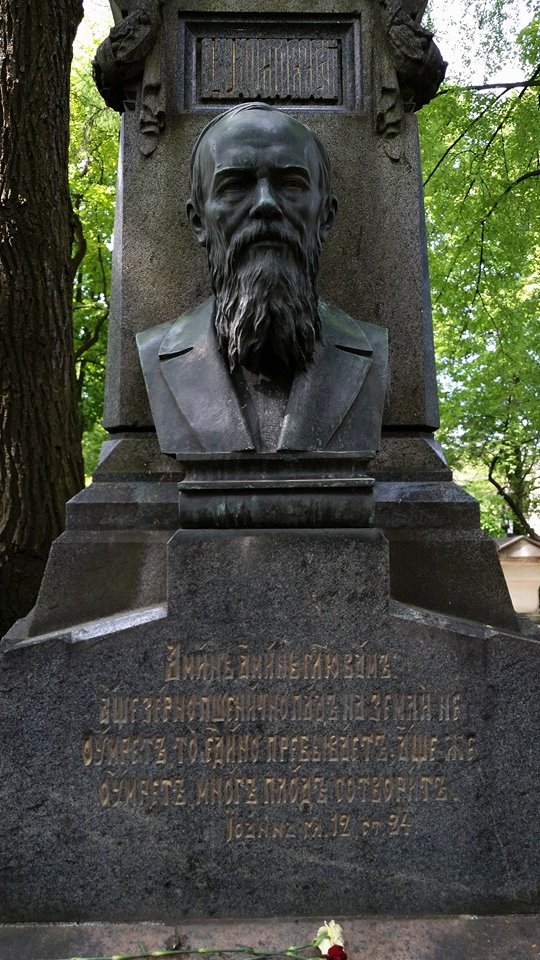 Verily, verily, I say unto you,
Except a corn of wheat fall into the ground and die, it abideth alone:
but if it die, it bringeth forth much fruit.— Jesus, from John 12:24