“How do you deal with guilt? With the knowledge that you have done something too terrible to confess? In this original solo performance based upon Dostoevsky’s Crime and Punishment, Jonathan Curry plays a Raskolnikov of the here and now, tormented by the reality of his actions, his sanity torn to shreds. Can there be any escape from facing up to his responsibility? Can he prove that he has the right to rise above law and morality? Or must he resign himself to his own inescapable humanity.”

” Among the work of other Russian writers, Dostoevsky’s Crime and Punishment was dramatised by Jack Pulman in three episodes in 1979, starring John Hurt. It had first been broadcast as a television play in 1953, with Kenneth Griffith in the lead, and the most recent television production was aired in 2002, with John Simm as Raskolnikov. Radio versions were broadcast on Radio 3 in 1975 in the World Drama strand, and in 2000. A different take on the story was presented in the David Farr play Crime and Punishment in Dalston in 2002 on Radio 3. 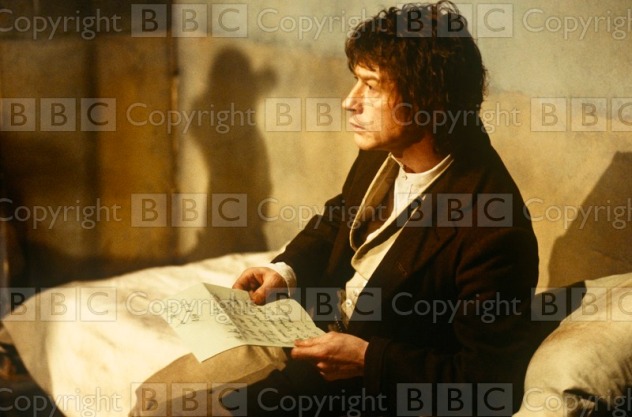 Crime and Punishment : 1979 Transmission Date: 22/05/1979 Annotation: picture shows – John Hurt as Raskolnikov . Raskolnikov (John HURT), a poor and isolated student, is sure of only one thing: all great men are above the law in all ways. Deeply in debt he puts his theory to the ultimate test: murder. DOSTOEVSKYs famous story. Personalities: l-r : Hurt, John Location: GB Genre: Costume Drama Ref Number: 14832687

The Brothers Karamazov, another of Dostoevsky’s novels, was the subject of an early BBC2 serial in 1965, in the days when many of such productions were made in the BBC’s Glasgow studios. Ironically they could not be seen in Scotland, as BBC2 did not start transmitting there until 11 June 1966. This production sadly no longer exists, apart from a clip which was used in a feature on Dostoevsky in the BBC2 arts series Review in 1971. Two different dramatisations of the novel were heard on Radio 4 in 1989 and 2006.

Dostoevsky’s The Idiot was also produced for BBC2 in Glasgow, and was shown in early 1966; it was also adapted for Radio 4 in 1978 and 2002. His story The Gambler was adapted in a two-part version by John Hopkins, in an early colour production on BBC2 in February 1968. Another version was made for the Open University in 1980.”

Crime and Punishment – The Rock Musical

Synopsis
Dostoevsky and the music of Toyah Willcox and Simon Darlow. As the skies darken over The Scoop, so does our story. Published in 1866 Dostoeksky’s Crime and Punishment is one of the most famous and influential novels in world literature. When an idealistic student kills a ruthless money lender, who terrorises the poor of St. Petersburg, the novel challenges us to ask if murder is ever justified.

Rock music works as the perfect medium to express the energy, rebellion and passion of the story. Fittingly this new musical production, adapted and directed by Phil Willmott, will feature specially written songs and favourite tracks by British rock legend, Toyah Willcox and her song-writing partner Simon Darlow.