A referential  source focused on the Great Russian Novelist’s Relationship to, and Reception in Britain

This is an online journey of a unique literary influence, from Dostoevsky’s visit to London to his impact on British culture and the Arts.

To Mark the 150th Anniversary of the Novel Crime and Punishment

The opening event will take place on 11th November 2016 (on Dostoevsky’s birthday) at the UCL Bloomsbury Studio. It will start at 10 am, free-admission. The morning programme of the DDUK consists of a screening of the documentary Fyodor Dostoevsky (2006 Video), from the series Great Russian Writers, by Kultur International Films. This screening will be followed by the premiere of a theatrical monologue Raskolnikov, which was especially created for our event, by the English actor Jonathan Curry.

The afternoon event will take place at UCL School of Slavonic & East European Studies (SSEES) from 3.00- 5.00 pm, in the Masaryk SCR. Please, join us for a presentation about materials relating to Dostoevsky in UK libraries, focusing on Crime and Punishment by members of COSEELIS (Council for Slavonic and East European Library and Information Services). The session will include presentations prepared by Mel Bach (Cambridge University Library): “Hands Up! : A Crime and Punishment Exhibition in Cambridge” and Katya Rogatchevskaia (British Library): “Dostoevsky at the British Library”, while
Wojciech Janik (UCL SSEES Library)  will present a library guide focusing on Crime and Punishment.

As part of this session, we are also planning a photographic exhibition inspired  by St. Petersburg, the “big” setting of the novel Crime & Punishment. Its details, smaller spaces are captured in these wonderful images presented under the title:

On 17th November at 7.00 pm  at  Rossotrudnichestvo (Russian Cultural Center in London) The theatrical director Dmitry Turchaninov and his drama group will present fragments from Netochka Nezvanova, White Nights, Poor Folk in a form of an open class of acting   with immersion into a psychological subtleties of the material, entitled

(in Russian language, based on early works by Fyodor Dostoyevsky) 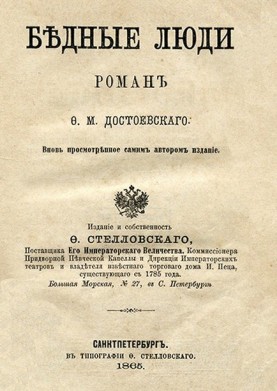 (in Russian language, based on early works by Fyodor Dostoyevsky)

In December, Barbican Cinema has created a special programme, a film retrospective:

Crime and Punishment (15) A compassionate study of the mind of a murderer. The poor student Raskolnikov, through the interweaving of various relationships, confesses to the killing of a pawnbroker and his daughter, and is tortured by guilt. Masterly performances by an outstanding cast including Georgi Taratorkin and Maya Bulgakova. USSR 1970 Dir. Lev Kulidzhanov 200 min. In Russian with subtitles

Dostoevsky’s story of the young teacher Alexei Ivanovich, who tries to win happiness at the roulette table, but instead loses everything. USSR 1973 Dir. Alexei Batalov 99 min. In Russian with subtitles

The Brothers Karamazov (Russian: Братья Карамазовы, translit. Bratya Karamazovy) is a 1969 Soviet film directed by Kirill Lavrov, Ivan Pyryev and Mikhail Ulyanov. It is based on the eponymous novel by Fyodor Dostoevsky. It was nominated for the Academy Award for Best Foreign Language Film. It was also entered into the 6th Moscow International Film Festival, winning Pyryev a Special Prize.

with the following screenings:

With special thanks to my colleagues at UCL SSEES & Library Services